New Orleans’ ensemble TANK AND THE BANGAS are coming off some pretty huge momentum after rocking the legendary Newport Music Festival and preparing for their upcoming fall tour (which will bring them through Little Rock on Sunday Sept 22). They … END_OF_DOCUMENT_TOKEN_TO_BE_REPLACED

Miami, Florida band, TORCHE, was able to put quite a feather in their cap on August 14th when they made their national television debut on Late Night with Seth Meyers. According to the shows producers, it was the loudest performance … END_OF_DOCUMENT_TOKEN_TO_BE_REPLACED 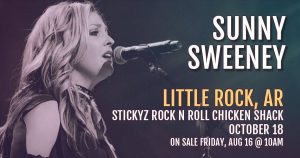 Looking for the hottest new tickets in town? Today’s onsales include Sunny Sweeney (Oct 18 at Stickyz) and Moonshine Bandits (Oct 31 at Rev Room).

Sunny Sweeney (Houston, TX) has had the honor of spending most of 2018 and 2019 supporting Bob Seger and the Silver Bullet Band’s farewell tour playing arenas throughout the country. Her last appearance in Arkansas was opening for Cody Jinks at the Temple Live in Ft Smith. Tickets are on sale today for $15, but there is also a very limited number of VIP tickets for $75. The VIP ticket includes early admission to the show, meet & greet, photo op, *a glass of wine*, autographed CD, koozie and lanyard.

Moonshine Bandits (Los Banos, CA) are a country rap duo who have performed and recorded with David Allan Coe, Colt Ford, The Lacs and Demun Jones among many others on the Average Joes Entertainment roster. They have previously played the Rev Room twice with The Lacs. This show is on Halloween, so you should probably be thinking of your best costume. Tickets are on sale today for only $15.

There’s one more going on sale today (I think?), but we haven’t even announced it yet. Will update when I can…

<<UPDATE>> On Saturday Sept 14 Micky & the Motorcars (Austin, TX) will perform at Stickyz Rock’n’Roll Chicken Shack with special guest Lazy Desparados. Tickets for this show are going on sale today at 3pm for $10 in advance.  The Motorcars have just wrapped up their annual festival, The Braun Brothers Reunion, in Challis, ID with brothers Reckless Kelly and special guests Steve Earle, Reverend Horton Heat, Randy Rogers Band, Parker McCollum, Roger Clyne & the Peacemakers, Wade Bowen, Cody Canada, and so many more. The last time the Motorcars were in Little Rock was November 2018 when they also performed at Stickyz.

Did you miss TORCHE’s national television debut last night on Late Night with Seth Meyers? Don’t worry because we’ve got it right here!

Don’t miss this Relapse Records recording artist when they perform at Little Rock’s Rev Room on Thursday September 5th. Advance tickets are on sale now for $15.